The last great day in Estonia on 21st

We woke up to a cloudless and calm day. Our last morning at Virtsu as well as our last one in Estonia. We had expectations of a morning with good numbers of migrating divers and in fact it started good with nice flocks of Black-throated Divers, but the numbers, unfortunately, dropped dead after a couple of hours. However, it was a lovely morning and we had a nice chat with a Finnish birder, which we also met last year. Results worthy of mention from our session (04:45-10:00 hrs): Arctic Skua (9), Temminck’s Stint (3), Common Scoter (230), Velvet Scoter (57), Scaup (21), Red/Black-throated Diver (21), Red-throated Diver (351), Black-throated Diver (307), Goldeneye (656; passage of males to moulting grounds, which is specially studied at Virtsu by Dr. Raul Vicente).
Migrating passerines worthy of mention: Common Rosefinch (30), Spotted Flycatcher (35) and Grey Wagtail (1). The latter is rare in Estonia!
We headed to our house and packed our stuff. We had guided tour by Peeter Pung, the owner of Pivarootsi Tuulik, in his beautiful Windmill. Very impressed by his work! We payed and then headed to the northern part of huge nature reserve Matsalu. But before we reached Matsalu we spotted an adult Lesser Spotted Eagle from the car! Janne stood hard on the brakes and turned back on the main road. We soon found the bird in perfect light condition gliding slowly toward us for five minutes or more and finally passed over our heads! Just awesome! We then continued and reached the Heaska bird tower in Matsalu. We scanned the area and soon Janne shouted load about some animal or dog down among the cows on the shore meadow. Wow, a Raccoon dog! In broad daylight. What a beautiful creature. A lifer for all of us. After another ten minutes we heard a strange call and Raul was alert and screaming “White-winged Black Tern!” And two very beautiful adult birds passed close to the tower. They flew further into the Matsalu reserve. What a sighting, which also was a lifer for Raul. On our walk from the tower to the car Raul found the third Lesser Spotted Eagle of our trip soaring at some distance! What a grand finale for our Estonian trip!
That’s all from us right now and we hope you have enjoyed this blog! The Latino Cabaret on Tallink ferry is calling!
Cheers
Janne, Ralle and Nicke
﻿
﻿ 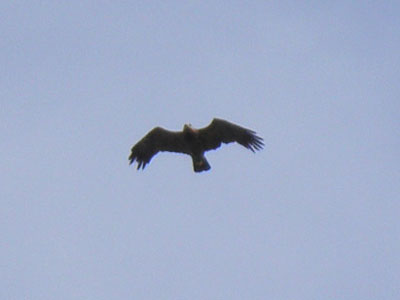